Iceland is a country of waterfalls. Like Seljalandsfoss, towering and slender presiding over the the surrounding countryside like an elegant queen, or Hraunfossar, hundreds of meters long trickling into an eerily blue glacial river, or Fossinn í Rauðfeldsgjá, a small oasis hidden deep within a gorge at the end of a hike through a narrow ravine. But none are quite as beloved as Iceland’s Gullfoss. 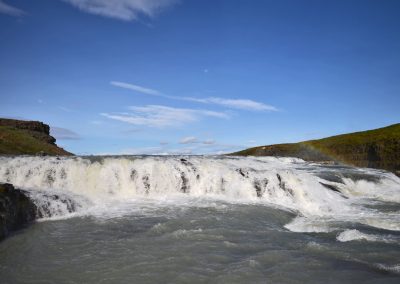 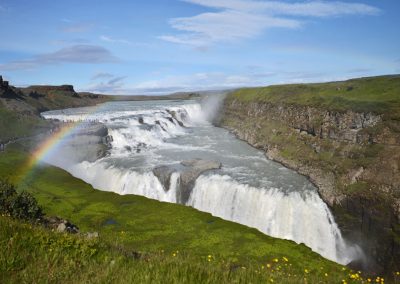 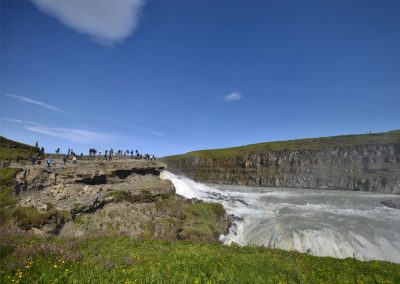 Deep in the Heart of Iceland… and Icelanders

Geographically near the interior of the country sits Gullfoss, a mighty, double tiered cascade which has also proven to be a site near and dear to the nation’s heart. It’s striking beauty and sheer force is matched in intensity by the impassioned feelings Icelanders have shown for this waterfall, some taking dramatic measures to protect its legacy.

The Power of One

Early in the 19th century Sigríður Tómasdóttir, a local farm girl with no schooling, dedicated her lift to stopping a hydroelectric dam from being built, which would have submerged Gullfoss entirely. She went as far as threatening to throw herself into the waterfall to keep it from being dammed.

Because of her heroic actions to save the falls, Sigríður is often credited as Iceland’s first environmentalist—the first of many—and has become an icon of the power of the individual to make a stand in Icelandic society. Likewise, Gullfoss has become a symbol of how much the nation treasures the glory of its natural world.

Fall under the Spell

Gullfoss is a notoriously difficult waterfall to capture in photographs. Some say it’s because of its geography, falling into the deep Hvítárgljúfur canyon and shrouded in mist. To fully realize its depth and power, one must stand at the brink of the canyon where the roar of the cascade is nearly deafening and the spray is almost a downpour.

Despite these conditions, there is something hypnotic about the overwhelming rush of water. Visitors often find themselves transfixed by Gullfoss. But there’s no need to worry. We’ll bring the blankets and cocoa. You just bring your sense of wonder. Let Iceland Luxury Tours introduce you to a Gullfoss that will capture your heart.